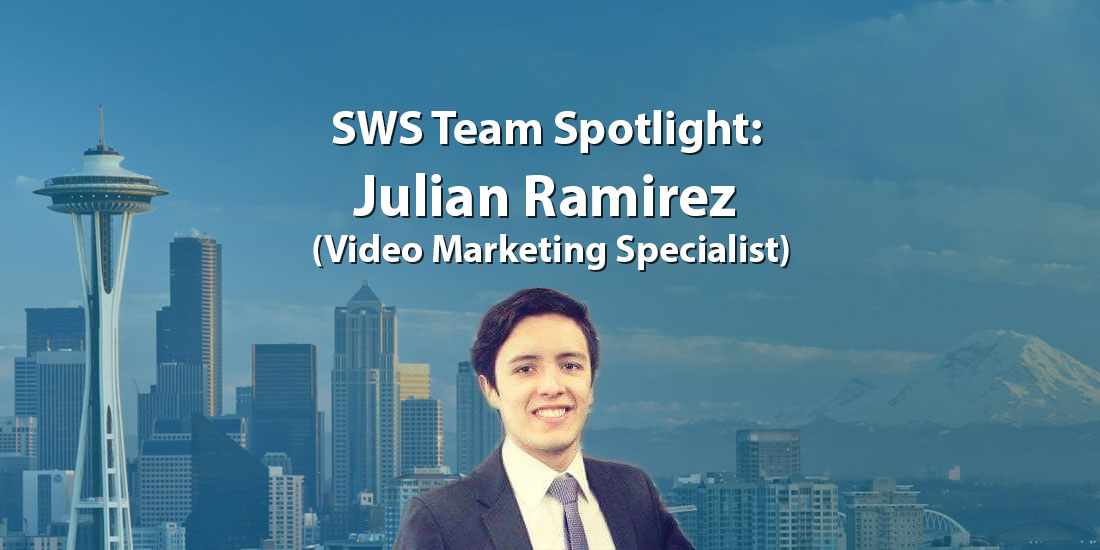 Seattle Web Search is comprised of talented individuals from different backgrounds with a passion for what they do. Each team member contributes their talents to help businesses improve their internet marketing strategies and branding. Today marks the start of a new series to spotlight our talented team.

The first member to spotlight is Julian Ramirez, the first Video Marketing Specialist to join the team and later became the Video Team Supervisor.

Question #1: Tell me a little about yourself

Question #2: And that’s why you applied for an internship with Seattle Web Search?

Question #3: What was your typical day like after you joined SWS?

I remember my first meeting with Geoffrey Purkis and Chris Purkis. We started developing programs to actually share videos and start working on videos. I would talk to Christopher once or twice a week to receive feedback or receive more tasks from different clients or the company itself. Later on, every week we would start catching up and then we would have our first meeting with new teammates. After a while, we switched our video editing program, which was really helpful for the company because we could keep track of the videos. Later on, Christopher would tell me that he’s not leaving the company but that he’s taking a step back and promoting me to the supervisor role. This was in May 2017.

It was kinda hard for me to start working after school was over because I’ve never been a supervisor before. However, I learned how to deal with it and had good workers over the summer. I started making spreadsheets to keep track of the videos myself and lately, I think I’ve been doing really well with delegating projects for my interns that’ll be the future of the company’s video projects. In the same spreadsheet, I keep track of the interns hours to make sure they’re getting enough hours for the week. I paid a lot of attention before but never actually took notes so starting to take notes really helped me as a supervisor. Right now in my last week, I delegated my position to a new worker, which was probably the last thing I did as a supervisor. That was pretty much how it worked.

Question #4: How did the team collaborate in making the videos?

Our job is just to create the video, so we checked which blog on the website needed one. We’re not involved in uploading the videos on Youtube, but it’s something Geoffrey wants us to work on later. I just delegate websites to work on and everyone has the same access to the web-based video editing tools we work with that’s really quick. As a team, our goal is to create high-quality video content for the sites.

Question #5: What did you like most about the internship?

I really liked how it helped improve my video editing and marketing skills, as well as working with a team, which was a goal for me in this internship.

Question #6: Which skills were you able to improve on?

Question #7: Have you had any interns who took your criticisms too harshly? Or were they appreciative?

Yes, but whenever I met with them, I reminded them that I’m open to ideas. I’ve never been the guy that’s like, “This is what we have to do.” Couple times they’ve reached out to me and talk to me. I told them if they have any issues with what I’m doing to reach out to me and let me know. I always repeat the protocol as well, “If I don’t help please reach out to the Human Resources Coordinator or the Human Resources Supervisor.” I think after receiving reports from HR and from what they’ve discussed with me, the interns haven’t had any issues with me.

Question #8: Describe yourself in three words

Best skill I know is communication. A psychology study I like to bring up is that married couples who tend to divorce have issues in communication over 50% of the time. My weakness is sometimes I seem rude when I’m being blunt. I tend to be more serious and direct, which may cause problems in a work environment.

Question #10: Which SWS project/video are you most proud of?

A video that made me really happy as a video editor was for one of our clients. The program we used at the time gave us two styles and I was told to only use the first one back when I first started. It was like a slideshow, which I found very boring, so I asked Christopher if we could use the other style. It was more colorful, more marketable and allowed me to be more creative. I’m most proud of it because I worked more with transitions, color, and could really show my skills.

Question #11: Have you worked on any other video projects outside of this internship?

No, actually this is probably the first item on my resume that’s related to major.

Question #12: What’s your next step after this internship?

I’m still in school right now. I have my Senior Year Capstone project as well as another video class that requires a lot of time. It’s basically just reaching out, my capstone project and graduating.

Question #13: What exactly is a Senior Capstone Project?

My major is in Interactive Media and Web Design, which is related to graphic design, programming, typography, and video production. We’re multimedia in general, so the project is just a professor giving you a step-by-step but it’s anything you can do that’s related to the major. So people have done movies, short films, cartoons, video games, 3D-printing, and I think last year some guy did a drone. So right now I’m working on a mobile application for an Android device.

I see myself rising a company to a mid to high-level position. Working related to video production, flash marketing, or something related to programming.

Question #15: Would you ever start your own company or just work your way up?

No, I would definitely in the future start my own company.

Question #16: How do you deal with stress?/What do you do to keep yourself motivated?

I’m a swimmer, so I normally do sports. I use a lot of pep talk and motivation like, “Yeah we got this/We can do this.” I have a plan for everything, so that’s like my motivation. Also, I get a lot of motivation from my family as well.

I think that the company is doing really well. I’d really like to stay in touch during the future for networking or projects in the future. I might work with you or you work with me. I’ll be in touch with Geoffrey definitely if he needs something. I think the company is on the right path. It’s grown a lot in the past year and is still growing.

Thanks Julian for all your hard work, we hope to start hiring within the year and will definitely be reaching back out to Julian when he is done with school.