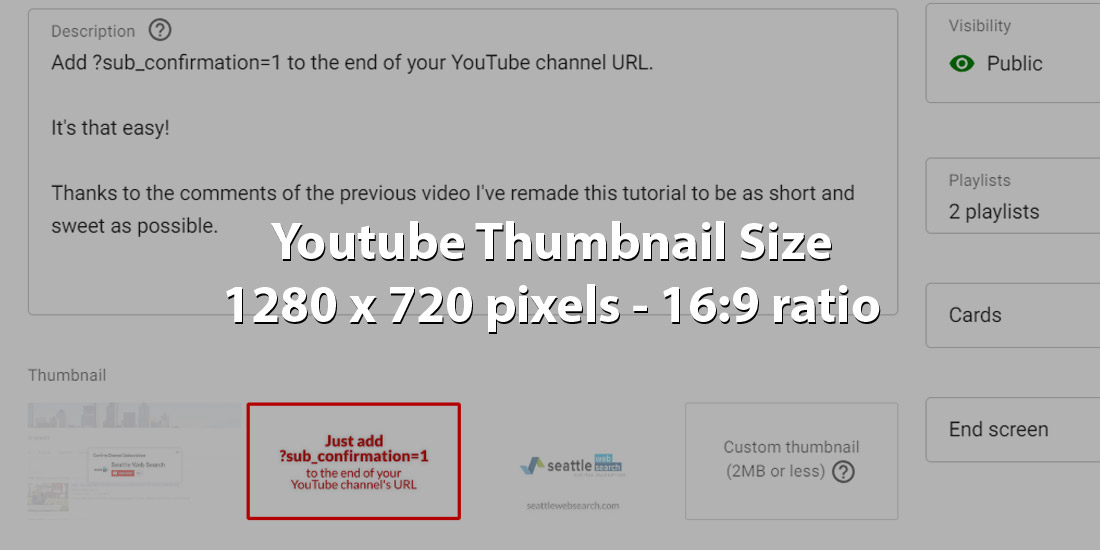 One of the best ways to improve your YouTube videos is to optimize your thumbnail. It’s like the cover of the book; it’s what grabs people when they’re browsing. They’re also what shows up in Google searches. So here are some tips and tricks to help you improve your thumbnails.

According to Google, thumbnails should be 1280×720 pixels, with a minimum width of 640. The ideal ratio for YouTube players and previews is 16:9.

Since thumbnails are small when you first see them in searches, then gets expanded, you’ll want a large image that can be scaled down. The image file you use must be under 2MB and in the JPG, GIF, BMP, or PNG formats.

After you upload a video, at the bottom of the video settings will be a series of auto-generated screen-shots from the video. But to the right is a button labeled “Custom Thumbnail” which lets you upload an image from your computer. YouTube will show you a preview of your thumbnail image and allow you to switch it out with a different picture if you want, even after the video has been published.

What Image Should You Use?

Using a custom thumbnail makes your video stand out more than using a screenshot would, and there are several effective methods for creating a custom thumbnail. One popular method is to make a simple graphic with the video title and your business’ name or logo. You can also take a still from the video and add graphics over it, or make a graphic and layer a still on it. Whichever method you go with, it’s important to be consistent. Consistent branding makes your content more immediately recognizable, thus increasing engagement.

Still Images:
Finding a still shot from a video is often tricky and can result in silly or embarrassing images. So it’s smart to have still shots professionally taken while the video is being filmed.

Contrasting Colors:
Graphics with bright or contrasting colors tend to draw people’s eyes more than plain colors. Photo editing software can help you brighten your image’s colors and increase saturation. But try not to go too far, you don’t want to make the image look bad.

Use Whitespace:
Whitespace, also known as negative space, makes your image look clean and organize. Combining whitespace and contrasting colors allows you to influence where your viewers’ eye goes.

Be Concise:
When you’re titling videos, it’s important to be concise, you should only include the most important information. People are less likely to click on videos with titles that are too wordy.

Here are some of our favorite tools for making YouTube thumbnails

Too Much Text:
Too much text in a video title will turn people off; it’s better for the viewer to be able to tell what your video’s about in a single glance.

Text That’s Too Small:
People use smaller text so it doesn’t distract from the thumbnail image, but you don’t want your text to be so small, making it too hard to read.

Irrelevant/Misleading Images:
While your thumbnail image is supposed to grab people’s attention, you don’t want to lie outright. Your image should be an honest reflection of your content; that’s the best way to get repeat viewers.

Not Split Testing:
You should always be experimenting and testing with your thumbnails; you’ll never be able to 100% predict how your audience will respond to your content. So be flexible.

If you found these tips to be useful or think we are missing anything regarding YouTube thumbnails, please let us know in the comments.